Standard test method for the determination of Bulk Density (i.e. unit weight and the voids in aggregates). (ASTM C-29/C-29M)

It is the space between the individual particles in a unit volume of the aggregate mass and is not occupied by the solid mineral matter.Voids within the particles, either permeable or impermeable are not included in the voids for the determination of bulk density by this method.

It is the mass per unit volume of the individual particles only.

Bulk density is the weight of soil for a given volume. It is used to measure compaction. In general, the greater the density, the less pore space for water movement, root growth and penetration, an seedling germination.

Bulk-density depends upon how densely the aggregate is packed. It also depends upon the size, distribution and shape of the particles. If the particles are of the same size, then it can be packed to a limited extent but when the smaller particles are added, the voids get filled with them and thus the bulk density increases. For a coarse aggregate, a higher bulk density means that there are few voids which are to be filled by the fine aggregate and cement. Thus bulk density also depends upon the degree of packing.
Note: Moreover, the bulk density as determined in our lab is not directly suitable for the conversion of mass to volume of the aggregates for the purpose of volume batching as the degree of compaction in the lab and at the site may not be the same.

Note down the dimensions and empty weight of the measuring contai 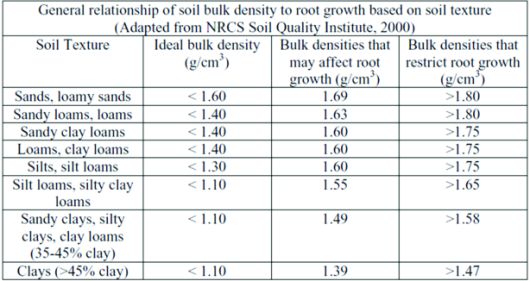