To perform the compacting factor test.

This test also gives the workability of concrete indirectly. This test is appropriate for concrete with the maximum aggregate size of 40mm.

Apparatus consists of two hoppers each in the shape of frustum of a cone and one cylinder. The hoppers have hinge door at the bottom and all the surfaces are polished to reduce friction.

The degree of compaction is also called the compacting factor and is measured with the help of density ratio that is the ratio of density actually achieved in the test to the density of same concrete when it is fully compacted.Its maximum answer is 1 but practically it is lesser than 1.

Relation Between Workability And Compacting Factor

Note: More is the compacting factor more will be the workability. 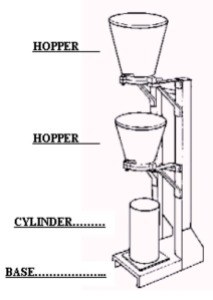 For the normal range of concrete the compaction factor lies between (0.8 – 0.92 ). The value of  compactness factor tells us that the workability of concrete is Low but the slump value tells us that the workability is Medium. This variation was due to the reason that when the first test was performed the then apparatus was not made wet which made the reading slightly more. The sensitivity of the compaction factor is reduced outside the normal range of workability and is generally unsatisfactory for compacting factor greater than 0.92 .